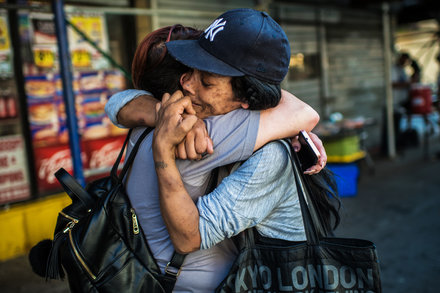 “Rich people do drugs, too. But they don’t often end up on the streets or in the methadone clinics where journalists almost always go to tell the story of the opioid epidemic. This is a public health crisis that is affecting all classes of Americans, but the poor are often the only ones seen suffering.”

— The sociologist adds that poor people are the only ones “surveyed” and the only ones subjected to the ethnographer’s gaze. When I worked in San Fran in the 80’s we offered $15.00 to injection drug users to take a 23 page administered survey about their demographics, number of children, and all their sex and drug habits. People lined up in The Mission and the Western Addition to take the survey. Sometimes they made up false names and changed location to take it again. 15 bucks was roughly the price of a “fix”. Needless to say there were no rock musicians in the line.

Photography of drug users is just the tip of the problem of representation. “Shooting down” is predominant for poor people, beggars, refugees, immigrants, street kids, and all the rest of humanity unable to withstand the cyclops gaze of the camera. We buy coffee table books depicting the wretched of the earth by master photographers from Lewis Hine to Sabastiao Salgado. Photographs like the drowned child on a Greek beech go viral. At holiday time we are actually deluged with images intended to get us to give charity to sometimes dubious organizations.

In books like “Shooting Down” and films like “Born into Brothels” photographers have given children cameras to make pictures in places the outsider photographer would not have been welcomed or allowed.

These images sensationalize, horrify, titillate — rarely to the spur action. We may “share” them on FB. At Christmas we may give a few bucks to “save the children.” But instead of leading to social change they pacify. Sontag was right in “regarding the pain of others” that we quickly become inured to horror — from the starving wraiths of Buchenwald to the daily genocide in Gaza.  https://www.nytimes.com/2018/08/31/opinion/photography-exploitation-opioid.html?rref=collection%2Fsectioncollection%2Fopinion&action=click&contentCollection=opinion&region=rank&module=package&version=highlights&contentPlacement=7&pgtype=sectionfront